Near-field communication (NFC) is a set of communication protocols that enable two electronic devices, one of which is usually a portable device such as a smartphone, to establish communication by bringing them within 4 cm (1.6 in) of each other.

NFC devices are used in contactless payment systems, similar to those used in credit cards and electronic ticket smartcards and allow mobile payment to replace/supplement these systems. This is sometimes referred to as NFC/CTLS (Contactless) or CTLS NFC. NFC is used for social networking, for sharing contacts, photos, videos or files. NFC-enabled devices can act as electronic identity documents and keycards. NFC offers a low-speed connection with simple setup that can be used to bootstrap more capable wireless connections.

Like other “proximity card” technologies, NFC employs electromagnetic induction between two loop antennas when NFC-enabled devices—for example a smartphone and a printer—exchange information, operating within the globally available unlicensed radio frequency ISM band of 13.56 MHz on ISO/IEC 18000-3 air interface at rates ranging from 106 to 424 kbit/s. (Wikipedia) 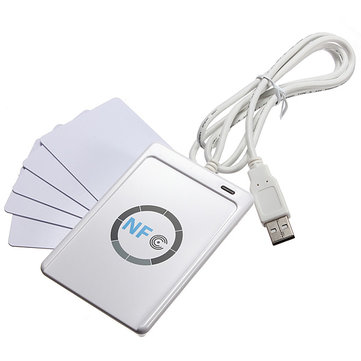 Linux
A while ago I wrote a short tutorial on installing the Advanced Card Systems ACR122U NFC USB reader on a Rasberry Pi 2 running Raspbian. This time we
Read More